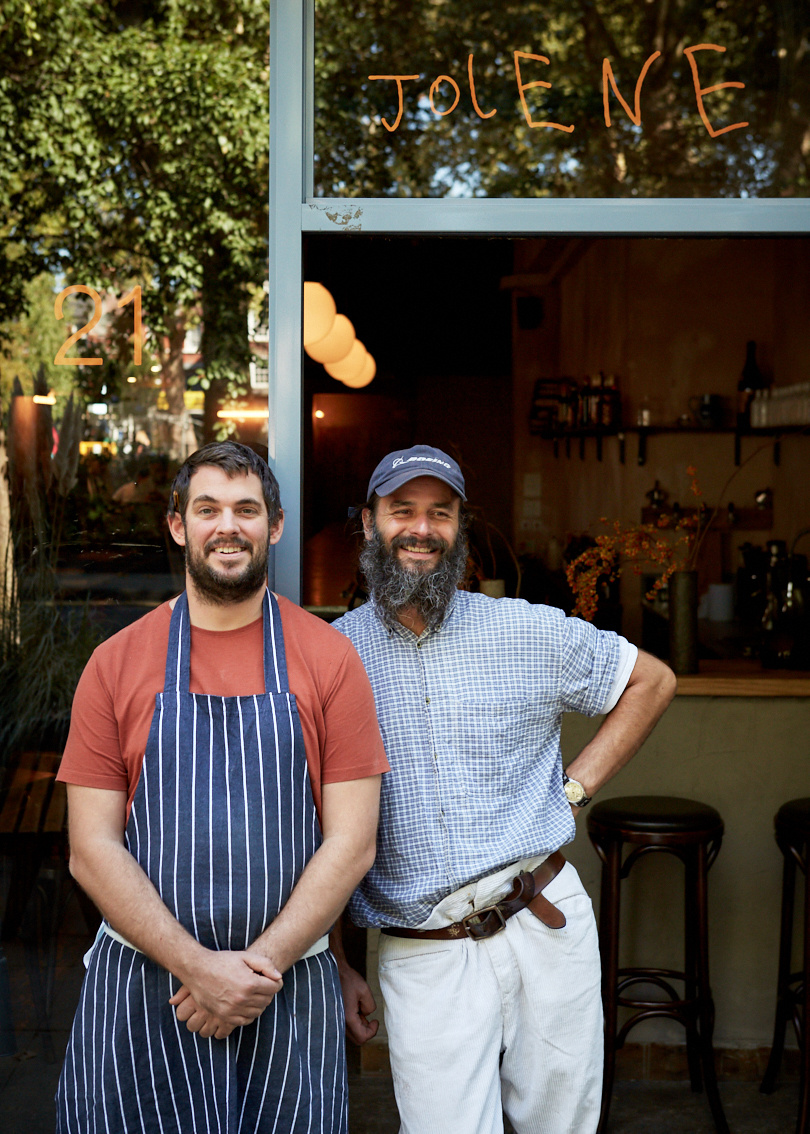 The oldest surviving terraced houses in England were built in 1658, and they stand at 52-55 Newington Green, in a neighborhood that borders Hackney and Islington. Across the historic green, at number 22, is Jolene, a bakery, restaurant, and wine bar opened in September by David Gingell and Jeremie Cometto-Lingenheim—the pair behind two of north London’s favorite neighborhood restaurants, Primeur and Westerns Laundry.

Both of the previous sites are in unexpected locations: Primeur is in a converted 1920s car garage on a smart residential street, whilst Westerns Laundry occupies a former wholesale laundry business. Despite the historic surrounding, the founders of Jolene have taken on something less architecturally interesting: the bakery is on the ground floor of an unremarkable, three-story block of flats, with retail space on the ground floor. “This is a fairly ugly building,” admits Jeremie. “Of course it helps to have a building that has a dramatic look from the outside, but I think we’d already done that twice. For me it was a challenge to see whether having an ugly outside could actually enhance the inside.”

When we met, Jolene had just been awarded “Design of the Year” by Eater London. “What’s interesting, is that the other contenders spent a huge amount of money on their design,” explains Jeremie. “For us, only a third of our budget is spent on design. We want people to remember us for the food we cook—the rest is really secondary.” The duo have teamed up with farmer Andy Cato (formerly of Groove Armada), who supplies the bakery with sustainably-farmed grains from Gascony. These are milled on site each day and turned into the breads and French bakes that fill the counter. “Of course I think then you need to put money in the details,” continues Jeremie. “I think that’s what makes a big difference, but the details don’t necessarily have to be expensive.”

Here are eight design ideas to take away, all on a budget.

“Under-promising and over-delivering is quite important,” explains Jeremie. “There are a lot of ugly places that become beautiful once you’re inside, and I like that contrast.” Jeremie compares this approach to their daily-changing menu. As in Primeur and Westerns Laundry, the day’s dishes are chalked up on the wall, the ingredients laid bare: “spelt, pumpkin, sage, and walnut” or “chicken, gem, anchovy, and croutons.” What comes out of the kitchen is invariably more than the sum of its parts.

Jeremie cites the utilitarianism of the Shakers as “a massive inspiration,” as well as the writing of Belgian designer Axel Vervoordt. (Read more on these design inspirations in 16 Design Ideas to Steal from the Shakers and Best of the Belgians: 10 Favorite Architects and Designers.)

(Want to apply limewash at home? Consult DIY Project: Limewashed Walls for Modern Times and Remodeling 101: Everything You Need to Know About Limewash Paint.)

4. Strip away the extraneous.

“I wanted to do curtains, then we didn’t have the money, so I bought some sticks instead,” he says. Vintage linen (a market find) is hung from a eucalyptus branch, which slots into a U-shaped wooden bracket beside the aluminum window frame.

7. Don’t be afraid to mix materials.

For more wabi-sabi inspiration, read about Japanese restaurant Bessou in New York, and this minimalist kitchen in Tokyo.

Taking on a food tour of London? Don’t miss a few of our favorites: